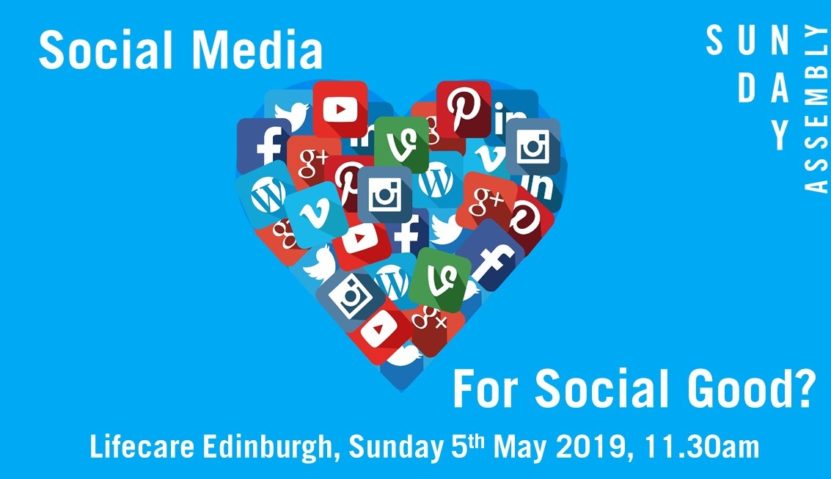 This month’s Sunday Assembly focuses on the potential for using social media for good. Our speaker is Dr Jennifer Jones of Hackers Scotland. Jen writes:

“A decade ago, social media has heralded a platform for change. It was seen as democratising the tools to tell stories, for its users to connect to each other and to make content in ways that not previously imagined. However, at the end of last year, dictionary.com declared that the word “misinfomation” was their “word of the year” to sum up 2018.

The government released a White Paper on preventing harm online this week, in response to rising instances of trolling and targeted online abuse, especially of those who have jobs in the public domain (such as journalists, politicians and academics) and heightening political environments causing citizens to take to social media in acts of campaigning, is it possible to use social media for social good instead? This talk will explore how it is still possible to find joy on social media and how to protect yourself from the negativity online.”

Jennifer is a freelance journalist, co-organizer of hacks/hackers Scotland, an independent researcher and digital media practitioner interested in promoting and supporting media literacy and community media for a change. Her PhD examined the rise of alternative media and citizen journalism at the Olympic Games. She works with art, educational and community groups across the UK to develop media and digital literacies using citizen journalism, event-based media activism and participatory approaches to developing media and digital literacies. She is currently the deputy editor of The Glasgow Sloth. And we are THRILLED to have her join us for May’s Sunday Assembly.

There will also be our usual mix of songs to sing, poems, reflections, conversation and cake. Sunday Assembly is Edinburgh’s secular congregation, we are family (and dog) friendly, fun and free to attend. Join us at 11.30am on Sunday 5th May at Lifecare Edinburgh, 2 Cheyne St, Stockbridge EH4 1JB to live better, help often and wonder more!

It's Sunday Assembly Edinburgh this morning! Join us at 11.30am for Transitions with guest speaker Sarah Haywood, host @curiousCY, with poems, songs, reflections and the chance to celebrate life together!  https://ecs.page.link/hytT7

Our next online assembly is on Sunday 3rd October - Transitions with Sarah Haywood. Come and join Edinburgh's secular congregation as we strive to Live Better, Help Often and Wonder More. https://ecs.page.link/hytT7

This Sunday, @lvsunassembly are back with a look at wildfires & COVID, @SundayA_London are in-person with Professor @kimawade talking about false memories, and @SunAssemblyEdin have art therapist Sarah Haywood on transitions. Plus songs and guest performances, naturally.

It's Sunday Assembly this weekend! Join us 11.30am for Transitions with Sarah Haywood, poems from @jennyclarkesf, hosting from @curiousCY and some great songs to enjoy including this from The Lion King  The Circle of Life Lyrics - The Lion King https://ecs.page.link/oCppG

I'm looking forward to hosting @SunAssemblyEdin this weekend. Join us for singing, community and some time to reflect on transitions with our wise and kind speaker Sarah Hayward. All welcome. 😊👇 https://twitter.com/SunAssemblyEdin/status/1443265568547688452